Best States for Divorce During a Pandemic 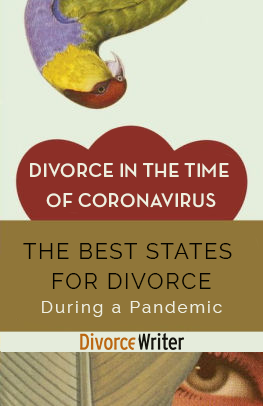 Across the country, state and federal courthouses are taking measures to reduce the spread of COVID-19 including expanding the use of video hearings and teleconferencing, staggering court hearing times, and postponing court dates until stay at home orders are lifted. While these precautions will likely cause a significant backlog of cases, the good news is that you can file for divorce even if your courthouse is closed to non-essential cases. The court system cannot come to a complete halt because of criminal cases where constitutional rights are at issue and other essential cases where safety is an issue like emergency domestic orders and orders of protection, so court clerks are still processing new case filings and judges are trying to resolve as many cases as they can without a hearing.

Tier One States: The Best

When it comes to getting a divorce during a pandemic, the Tier One states are considered the best because they offer e-filing start to finish and allow you to get an uncontested divorce without going to court. While many counties offer some electronic filing, when you actually an create an e-filing account and start making selections, you'll generally find that most offer only e-filing in cases that have already been filed—e.g. not to open a new divorce case--or they don't offer any e-filing at all for divorces cases.

It's no surprise to see Nevada on a list of the country's best states for divorce. Reno was once known as the divorce capital of the U.S., and people from all over the country would move there for six weeks and establish residency just to get a quick divorce. No hearing is required in Nevada to get an uncontested divorce and you can have a judge-signed divorce decree in your hand in a matter of days, which is among the fastest in the country. While only Clark County residents can e-file new divorce cases right now, that covers nearly 75% of Nevada’s population.

Washington is unique in that it is the only state where you can file for divorce in any county, regardless of where you live, as long as you have lived in-state for at least 10 days. In the counties that offer e-filing, you’ll file the initial paperwork including the Petition, and then file additional documents along with the Decree later, but because Washington has no minimum in-county residency requirement, it may be more convenient to file in one of the counties that allows you to mail in all of the paperwork at once instead of in two stages. With this option you don’t need to set up an e-filing account and don’t need to remember to file more documents later. No hearing is required to finalize an uncontested divorce in Washington. You’ll receive a judge-signed Decree in the mail.

Indiana offers statewide e-filing and doesn’t require a hearing to finalize an uncontested divorce. Compared to most states, Indiana requires very few uncontested divorce forms and has low filing fees, which range from $130-$176 depending on the county, with smaller rural counties usually being lowest. If you’re filing in Indiana, keep in mind that there is a 90-day mandatory waiting period that doesn’t begin to run until the divorce is filed.

Iowa was the first state to require e-filing in all divorce cases, even those filed without an attorney. Mandatory e-filing spread county by county over a few years until June 2015 when all Iowa counties had implemented it in divorce cases. Five years later, only Illinois has joined Iowa as a state requiring mandatory e-filing in pro se divorce cases. As long as the parties have a written agreement, no hearing is required to finalize a divorce in Iowa, and of the Tier One states, Iowa also has a comparatively low divorce filing fee at just $185.00 statewide.

Oregon offers statewide e-filing throughout the uncontested divorce process and no hearing is required to finalize. In 2012, Oregon abolished it’s 90-day post-filing waiting period so divorces can be finalized at any time after they are filed, although in some counties you may have to wait a few weeks before you can get a judge-signed copy of the Decree.

In all except 11 of New York’s 62 counties you can e-file a divorce case. Unfortunately, because some of the most populous counties (Bronx, Erie, Kings, New York, Queens) aren’t among those offering e-filing in new divorce cases, only about 50% of the state currently has access. On the bright side, in the last couple of years New York has added several new e-filing counties so unlike many states, it appears to be moving quickly toward statewide e-filing in divorce. Additionally, no court appearance is required to get an uncontested divorce in New York unless adultery is the grounds. There’s no post-filing waiting period as long as the relationship between Plaintiff and Defendant has been irretrievably broken for at least six months so an uncontested divorce can be finalized right away although it usually takes a few weeks before you can get a judge-signed copy of the divorce judgment.

While Californians can get an uncontested divorce without going before the judge, e-filing is only offered in 16 of its 67 counties, and of those, only two with a population over one million (Orange and Santa Clara) offer e-filing to open a new divorce case. In all, only about 25% of the state can e-file a new divorce case. Like New York, California has added several new e-filing counties in the last year so hopefully statewide e-filing in new divorce cases will be a reality there soon. If you’re filing in California keep in mind that it has a six-month waiting period that doesn't begin to run until you file for divorce.

While the following states don't offer e-filing in new divorce cases, they also don't require a hearing to finalize your divorce, which means if you file by mail in these states, you can get an uncontested divorce without leaving home: AL, AZ, CO, HI, ID, KY, ND, MN, PA, SD, UT, VA.

Filing documents by mail, which has always been an option in all states, is often overlooked by divorce filers. While it may not be considered quite as good as e-filing because it's slower, requires multiple copies of documents, and may carry a slight risk for virus transmission, it does keep you from having to go to the clerk’s office, which will definitely help to reduce the spread of coronavirus.

Hopefully it goes without saying that if you do file by mail, use pre-glued envelopes or tape, or moisten the glue with water, not saliva, to seal envelopes. Also don’t lick your fingers to turn pages as you review your documents. It sounds like a no-brainer, but a lot of people do it out of habit without even realizing. Also include a self-addressed stamped envelope with adequate postage for the court clerk to use to return copies of each of your documents to you. Usually a 9 x 12 manila envelope is sufficient. You’ll also need to include the correct filing fee in the proper form. All counties accept money orders and cashier’s checks, but if you want to pay by personal check, call the court clerk first to confirm they accept them. If you write a personal check, again, make sure you don’t lick your fingers out of habit when you rip the check out.

Other Perks of Not Filing in Person

Besides reducing your chances of being exposed to coronavirus, e-filing or mailing in your divorce papers instead of taking them to the court clerk’s office also reduces the likelihood of problems with court clerk staff. While most clerk’s office personnel are helpful and courteous, some become frustrated with filers who don’t have attorneys, and sometimes legally sufficient paperwork is rejected because the filer simply didn't seem confident enough about the process.

The Worst States for Divorce During a Pandemic

These states offer e-filing in new divorce cases, but they also currently require you to go to the courthouse for a brief hearing with your judge to complete an uncontested divorce: CT, FL, GA, IL, MD, NJ, RI, TX, VT and WI.

These states fall into the fourth tier because they not only don’t offer e-filing, they also require you to go the courthouse for a brief hearing with your judge to complete an uncontested divorce: AK, AR, DC, KS, LA, MA, ME, MI, MN, MO, MS, MT, NC, NE, NH, OH, OK, SC, TN, WV, WY.

The lack of e-filing in the third and fourth tier states isn't a significant problem since all states allow filing by mail. The bigger hurdle in these states will be getting a hearing date to finalize the divorce. Most courts have already postponed non-essential cases like divorce hearings. Hopefully though, as judges get better at using the available technology, we will soon see more use of video hearings and teleconferencing in uncontested divorces. It is also possible that the pandemic may cause these states to temporarily suspend the hearing requirement in uncontested divorce cases where the parties have a written agreement. When spouses have an agreement that deals with the division of property and debts and the custody and care of any minor children they have, there's usually little reason to require them to give testimony in front of the judge since these matters could just as easily be sworn to under oath in affidavits or verified petitions like they are in about half of the states already.

Should I delay filing for divorce because of coronavirus?

No matter where you live, if you know you want to get a divorce, now is the time to file. Even if there’s a backlog, filing now means making progress in the divorce process, and it gets the clock running on mandatory post-filing waiting periods or separation periods in the states that have them.

If you're experiencing financial hardship because of coronavirus or for any other reason, instead of paying the filing fee when you file for divorce, you may file a request for fee waiver with your paperwork. If the judge grants the fee waiver, you can get a divorce without paying the filing fee. If your request is denied by the court, you'll need to pay the filing fee before your case can proceed.